There was a light south-easter blowing on the night of the 13th October 1862, and a white mist hung over the dark sea. The sky was clear, but the moon had not yet risen. Captain Joss had retired to his cabin on the Waldensian mail steamer, and in their berths slept the famous Christy minstrels, Dr Dyer, a vaccine surgeon, and no less than 17 ministers of the Dutch Reformed Church in Natal.  Also on board was Captain Bailey of the Royal Engineers, bringing with him the trigonometrical survey of the southern coast on which he had worked for the previous five years. Mr. Reeves, the second officer, was in charge of the vessel when, at about 11pm, it struck a reef. The captain who appeared on the deck almost at once, tried to reverse the engines, but the ship was stuck fast, water flooding into the engine room and putting out the boiler fires. Joss was overheard muttering, ‘well, we have made a mess of it!,’ and he ordered the life boats to be lowered.1“Wreck of the Aberdeen Steamer ‘Waldensian.’” Peterhead Sentinel and General Advertiser for the Buchan District. Friday December 5, 1862

Sixteen women were on board the ship and they were the first to be rowed to shore and safety. One of these, listed in the Saloon class, was Lucy Catherine Lloyd, travelling from Natal to the Cape where she was to assist her sister Jemima’s fiancé, Wilhelm Bleek, with preparations for their wedding. Her loving letter to her sisters written just after the wreck hints at the drama of the night and the enormous relief that all on board were rescued. We are all alive – & safe & well, she wrote. The steamer ran ashore near Struys bay I think they call it – but we are all safe – & I never can feel grateful enough that all the dear precious lives were spared …2Letter to Miss Lloyd and Miss Julia Lloyd written by Lucy Lloyd at Avondbloem farm near Struis Bay. UCT BC151 Deetz Collection

The wreck was reported widely across the British Empire. The Argus in Cape Town quoted the captain’s letter to the steam ships owner: I am sorry to inform you, he wrote, that the Waldensian is a total wreck …3“Loss of the Natal Mail Steamer: All Hands and the Mails Safe.” The Argus, Cape Town Thursday, October 16, 1862. The Natal Witness: Our old friend “Waldensian” is no more, and with her has been lost the whole of the valuable cargo. Happily, all the passengers and crew were saved. 4The Natal Witness, and Agricultural and commercial Advertiser, October 31, 1862 Our Durban Correspondent, October 29, 1862Eye-witness accounts included that of an unnamed passenger, quoted in the Glasgow Daily Herald, giving a vivid description of the dark night, his heralding sense of foreboding, (even though he declared himself to be no believer in presentiments) and then the moment of impact:

…it must have been about ten minutes after 11 P.M.—the regular tripe sound of the engine, not unpleasant to one sleeping under the quarterdeck, was intruded upon and broken—never to be renewed—by the hoarse direful, crashing noise, which, in an instant told its own tale, and convinced us all of the danger that surrounded us.5“Wreck of the Waldensian” (From the Natal Mercury of Oct. 28). Glasgow Daily Herald, Saturday, January 17, 1863.

A detailed report was also published in the In the Inquirer and Commercial News where where the vaccine surgeon described the event at length, detailing his role in attending to the ‘ladies’ on the beach, gathering brushwood and lighting a signal fire, and noting the final fall of the mainmast at about ten or eleven o clock the following morning .

All the accounts exonerated the captain and referred to his exemplary conduct in saving the entire crew and all the passengers. Yet the blame had to lie somewhere. In a letter published in the Argus, the Rev. Mr. Naude, wrote:

The second mate had the watch, and cannot account for the disaster. He must (according to the opinion of several passengers) not have been looking out well at the time, for the vessel was very near the strand. The second mate must stand accused of indifference. The captain. who proved himself a very careful sailor, could not for a moment have thought of danger, else he would not have gone down in his cabin to read. Not the least can be adduced against his management or character on substantial grounds. Not the least blame can be attached to him. He stands exculpated in the mind of every honest man. The moment the vessel struck he was on the deck, and behaved most nobly. He was composed, energetic, and decided—prompt, and kind to the last.6“Wreck of the Waldensian” (From the Natal Mercury of Oct. 28). Glasgow Daily Herald, Saturday, January 17, 1863.

The site of the wreck

Place names for this particular area of the southern Cape coast can be confusing, as the word “Struis”, or “Struy’s” as they had it in the 19th Century, is today part of the name of a town, a large bay and a rocky point, all dispersed across 21 km of shoreline. The settlement of Struisbaai lies at Northumberland Point which forms the west-most end of Struis Bay, which in turn extends to Struispunt (Struis Point) in the east. Located about 3 kilometres north of Struispunt is the closest town of Arniston (also known as Waenhuiskrans).

Struispunt forms a distinct break to the clean, sandy sweep of the Struis Bay shoreline. Hard quartzitic sandstones here have better suffered the ceaseless assault of the sea than did the shorelines either side and even if planed flat, they still jut into the ocean. These low-lying rocks extend intermittently offshore at least 1.5 km to the south east and form Bulldog / Saxon reef and beyond that, a rock known as the Outer Blinder. These are treacherous shoals, some merely 2 metres below the surface, forming a line over which waves break in all but the calmest of sea conditions. Seafarers have long known of the menace of Struispunt and Bulldog reef, both being well charted by the mid-19th Century, yet it is on this reef that the Waldensian is recorded as having struck and foundered.

When we visited Struispunt in November 2020 we searched for the possible landing site of the lifeboats bringing the passengers to shore that dark night. The intertidal rocks of Struispunt extend west for nearly a kilometre, gentle sloped but well exposed to the dominant southerly swell. This stretch offers poor prospects for a safe landing and accounts suggest this area was sensibly avoided by the lifeboat crews.

Northwards the shoreline is better sheltered and is more varied in structure with a series of coves and bays, some rocky-bottomed and obstructed by scattered reefs, others with a clearer access and more sandy seabed. Situated just north of the point is Otter Bay, the widest and most visible of the sandy bays, and we think this is where at least some of the lifeboats came ashore without problem. The white beach reflected in the moonlight would have made it singularly visible and the boats could safely be grounded without damage. Other landings were less successful, and likely took place in one or more of the coves to the north. One boat was hopelessly swamped and abandoned whilst another was stove-in by a rock.

The eye-witness accounts describe trudging over the dunes from one boat landing place to another, ‘running to and fro with bare feet, over sand and broken shells’.7“Wreck of the Waldensian” (From the Natal Mercury of Oct. 28). Glasgow Daily Herald, Saturday, January 17, 1863.  Indeed, dunes are a distinctive feature of this coastline, and they exist because of the wind that blows across the great Indian Ocean fetch. Wind driven oceanic swells not only deposit sand onshore that then form dunes but also create currents and sea conditions that contributed to the many wrecks that litter this coast, the Waldensian being just one of these.

As many of first-hand accounts of the wreck, as well as the details in Lucy Lloyd’s letter to her sisters, make clear it was a striking fact that not a single life was lost. This coast mostly was not kind to seafarers who fell foul of the many reefs and incessant waves. Consider the fate of the Arniston, for example, perhaps the most famous ship-wrecked nearby in 1815 with the loss of 372 lives and just 6 survivors. Benevolent sea conditions, a clear moonlit night and, if we believe the accounts, the steadfast command of Captain Joss meant a far happier outcome in the case of the Waldensian, the loss of possessions and poor Captain Bailey’s survey results notwithstanding.

The women of the Waldensian were drenched by the breaking surf and they must have been extremely chilly in the October night as they watched through the night for the remaining passengers to come on shore.  Lucy’s relief that all lives were saved was tempered by her sadness at the loss of the wedding presents she was bringing from friends in Natal to her sister and fiancé. Remarkably, Lucy lost not quite everything as two blue glass vases from their friends John and Marie Sanderson (he a noted botanist in Natal) floated ashore in one of Lucy’s boxes. These are today, as Patricia Scott Deetz, great-granddaughter of Wilhelm and Jemima Bleek notes, “an exquisite reminder of the far greater treasure saved that night, the life of Lucy Lloyd, without whom the Bleek-Lloyd Collection as we know it today would not exist” (unpublished Catalogue of the Bleek-Lloyd Collection in the Scott Family Archive).

It is also notable that of the many reports and eye-witness accounts that survive, Lucy Lloyd is the only one to mention that, in addition to “all the dear precious lives” that were saved, the ship’s cat and “poor old Kertch the dog” also made it to safety: a small indication of what later became remarkably evident – her empathy, alertness to detail, and her care for even the least amongst those in her ambit. 8Letter to Miss Lloyd and Miss Julia Lloyd written by Lucy Lloyd at Avondbloem farm near Struis Bay. UCT BC151 Deetz Collection 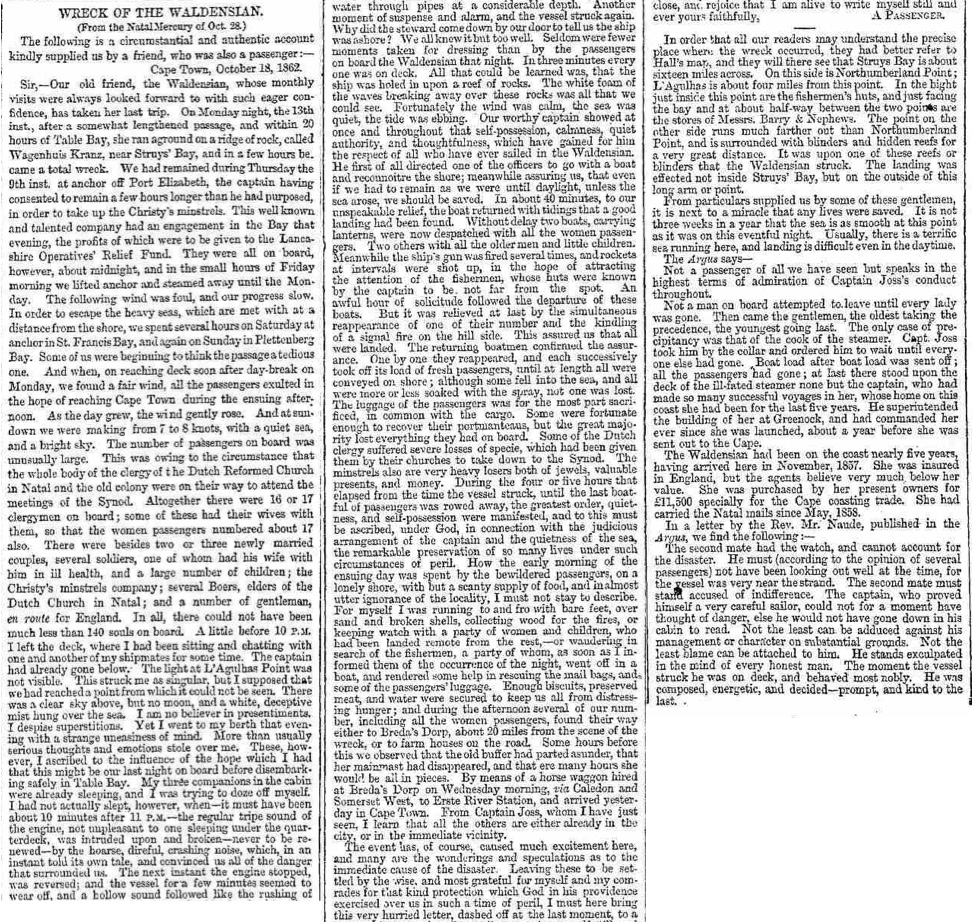 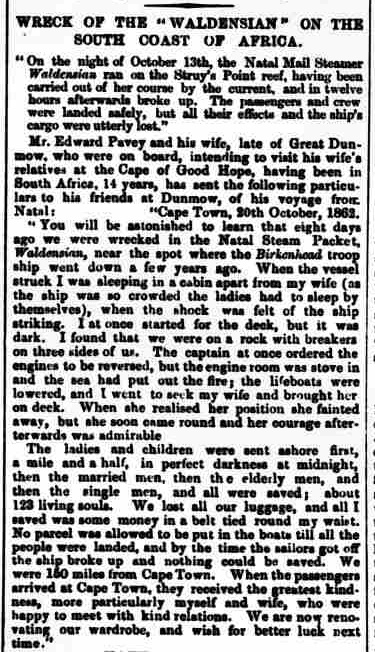 “Wreck of the “Waldensian” on the South Coast of Africa.” Bishop Stortford, Saffron
Walden and Epping Advertiser, Saturday, December 13, 1862. 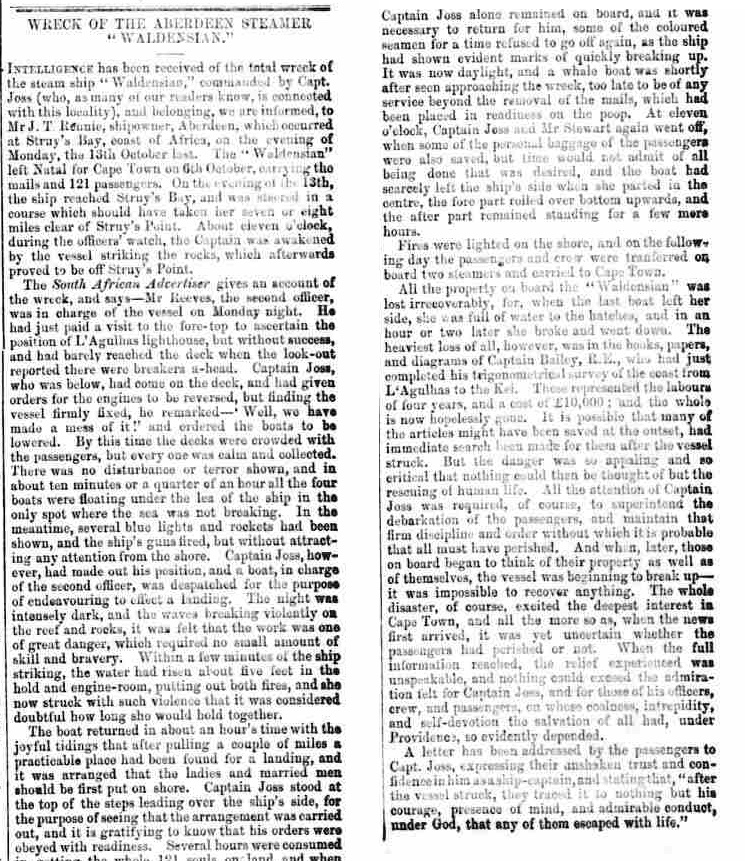 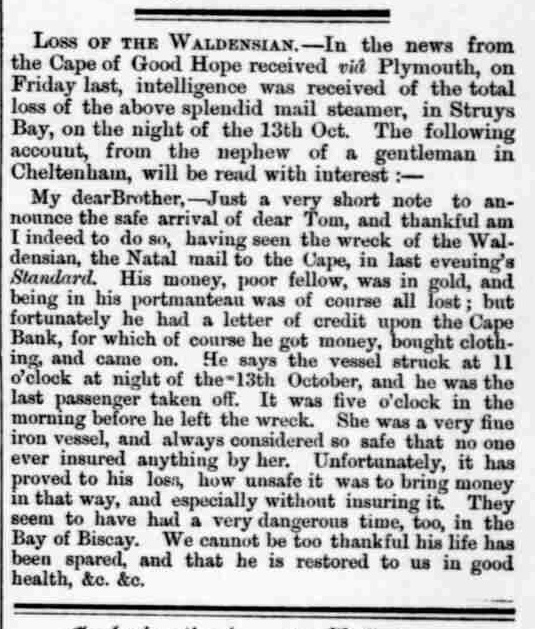 “The Wreck of the Natal Mail Steamer Waldensian.” The Witness, Tuesday, December 2,
1862. 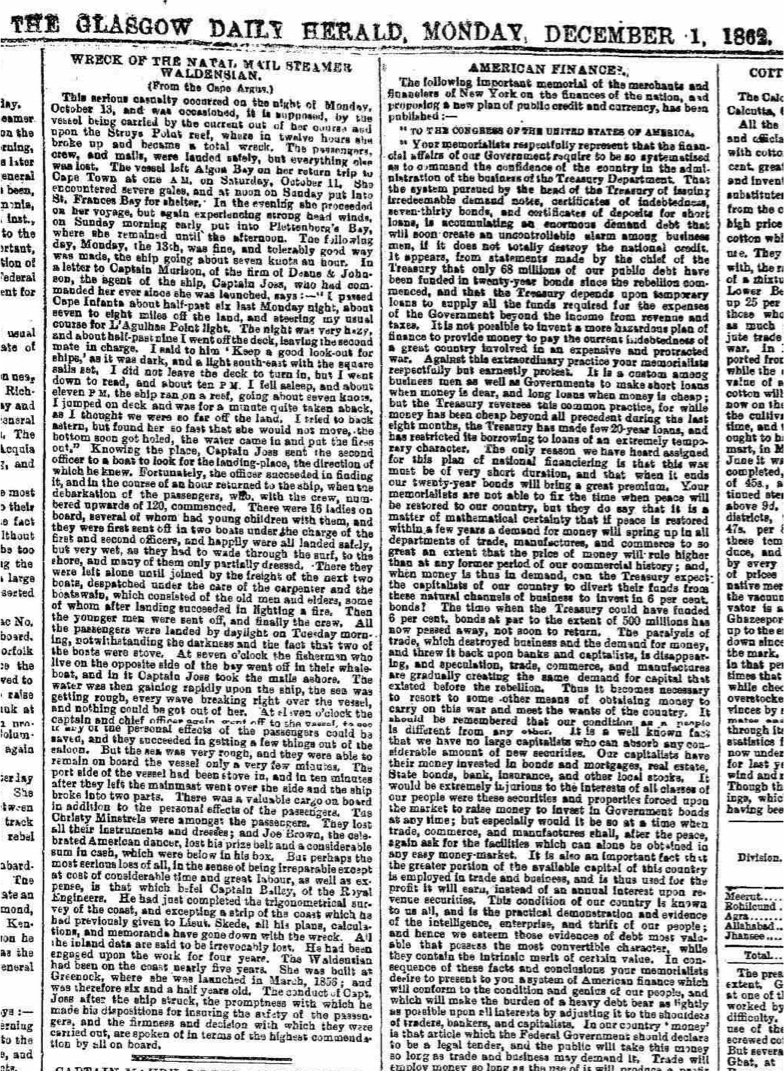 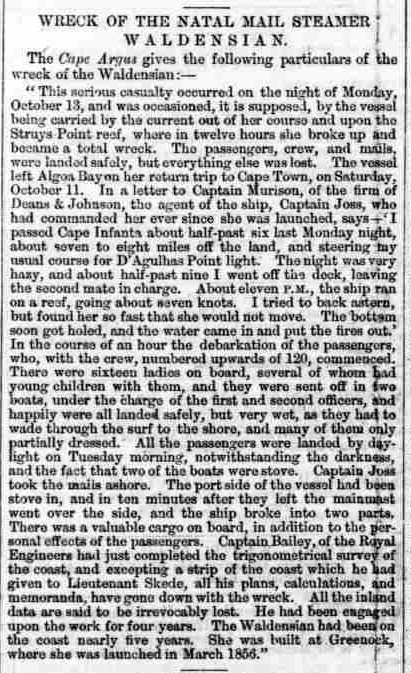 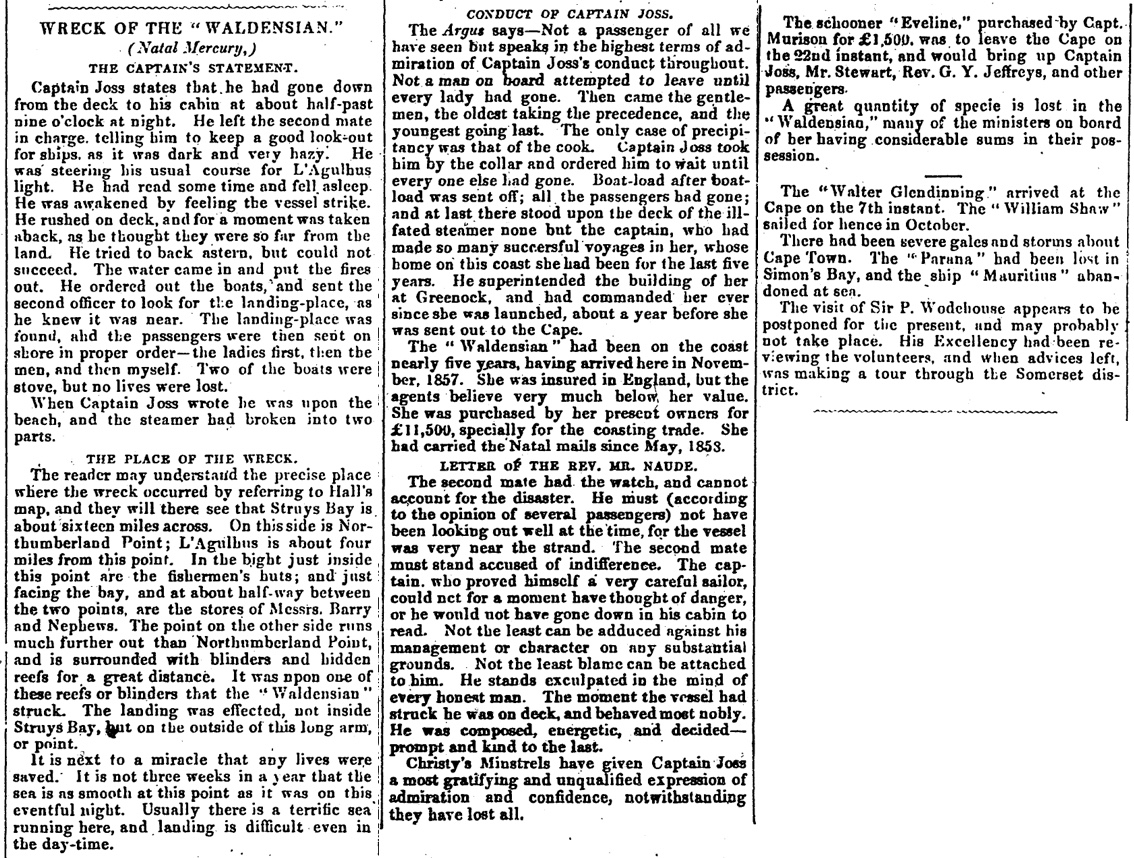 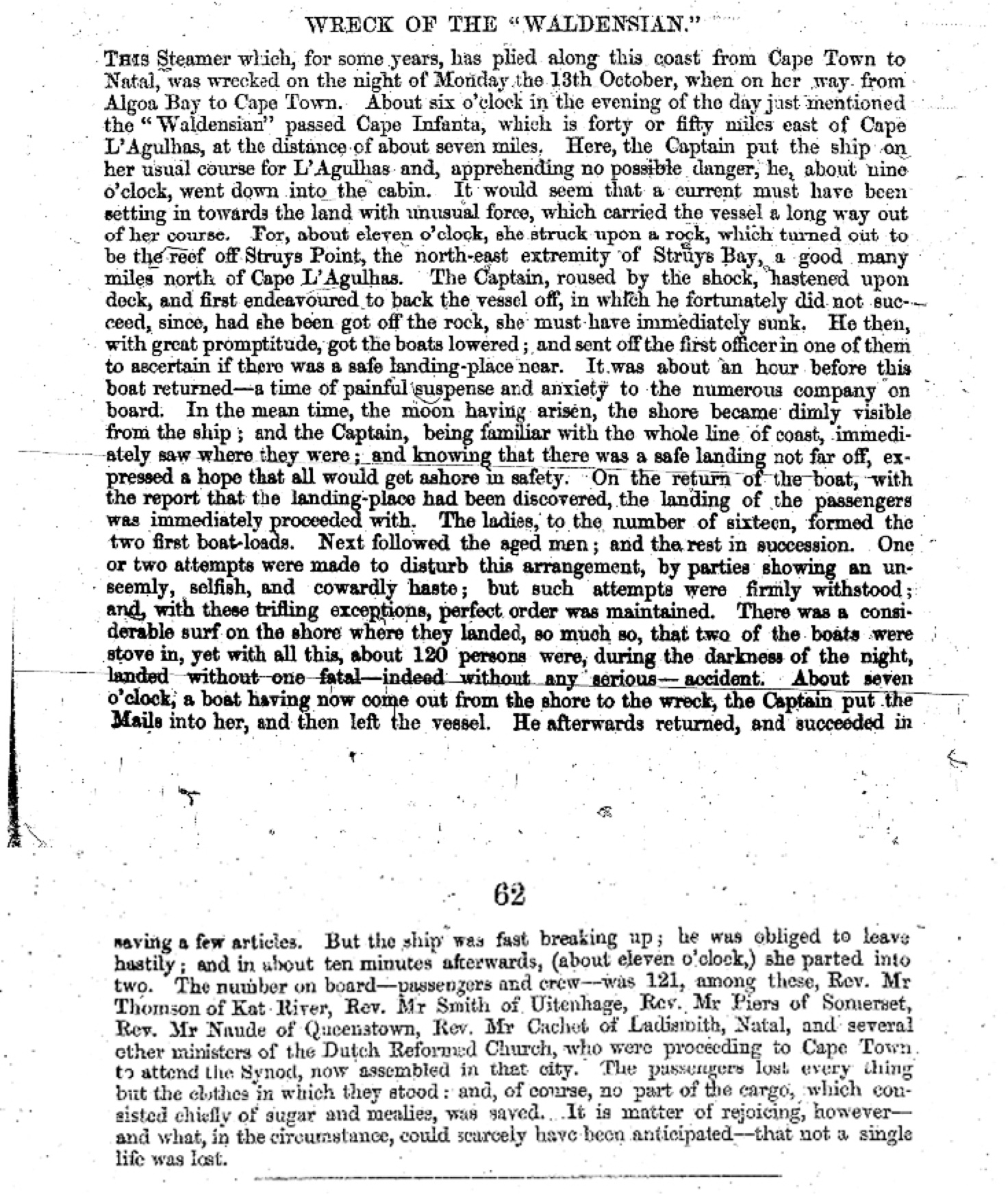