Flywhisks feature often in the rock art of southern Africa. The rock engravings of the Upper Karoo, in the Northern Cape, made by the |xam people and their ancestors, are no exception. The |xam narratives recorded by Bleek and Lloyd tells us how these objects were made and of what materials. The stories also indicate that their use and significance went well beyond their utilitarian function of ‘wiping the face’ to remove sweat.

Flywhisks (also called fly-switches) are present in the rock art and kukummi (singular kum, ‘stories’) of the |xam of the Upper Karoo. Dorothea Bleek’s Bushman Dictionary (p. 472) gives ‘brush, feather brush, made of the tail hair of the caama fox or of grass, used for wiping the face’ as the English for !nabbe, indicating that there were several types of flywhisks, made of different materials. Another term for this artefact is ≠haξrri-he, which Dorothea Bleek’s dictionary (1956, p. 650) describes as ‘feather brush used as pocket handkerchief, ostrich feathers tied to a stick and used to wipe the eyes’. 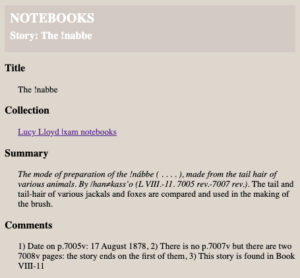 In an unpublished gloss to the kum ‘!gaunu-tsaxau (the son of Mantis) the Baboons, and the Mantis’ haŋ≠kass’o told Lloyd about the !nabbe, a flywhisk made with animal hair.1Lucy Lloyd |xam notebooks According to him, the ideal material to make a !nabbe was the “flowing tail” of the ||wa, that is, the caama- or bat-eared fox (Otocyon lalandii). The |xam used the whole of the ||wa’s tail, but not before heating it to prevent decay. Other animals mentioned by |haŋ≠kass’o in connection with the making of the !nabbe are the jackal (koro, Canis mesomelas) and the Cape fox (!gwiten, Vulpes caama), whose tails, however, are considered ‘ugly’. The handle of the whisk was made of the twig of a driedorn (!nabba, Rhigozum trichotomum), a bush very abundant in the part of the Karoo where the |xam lived. 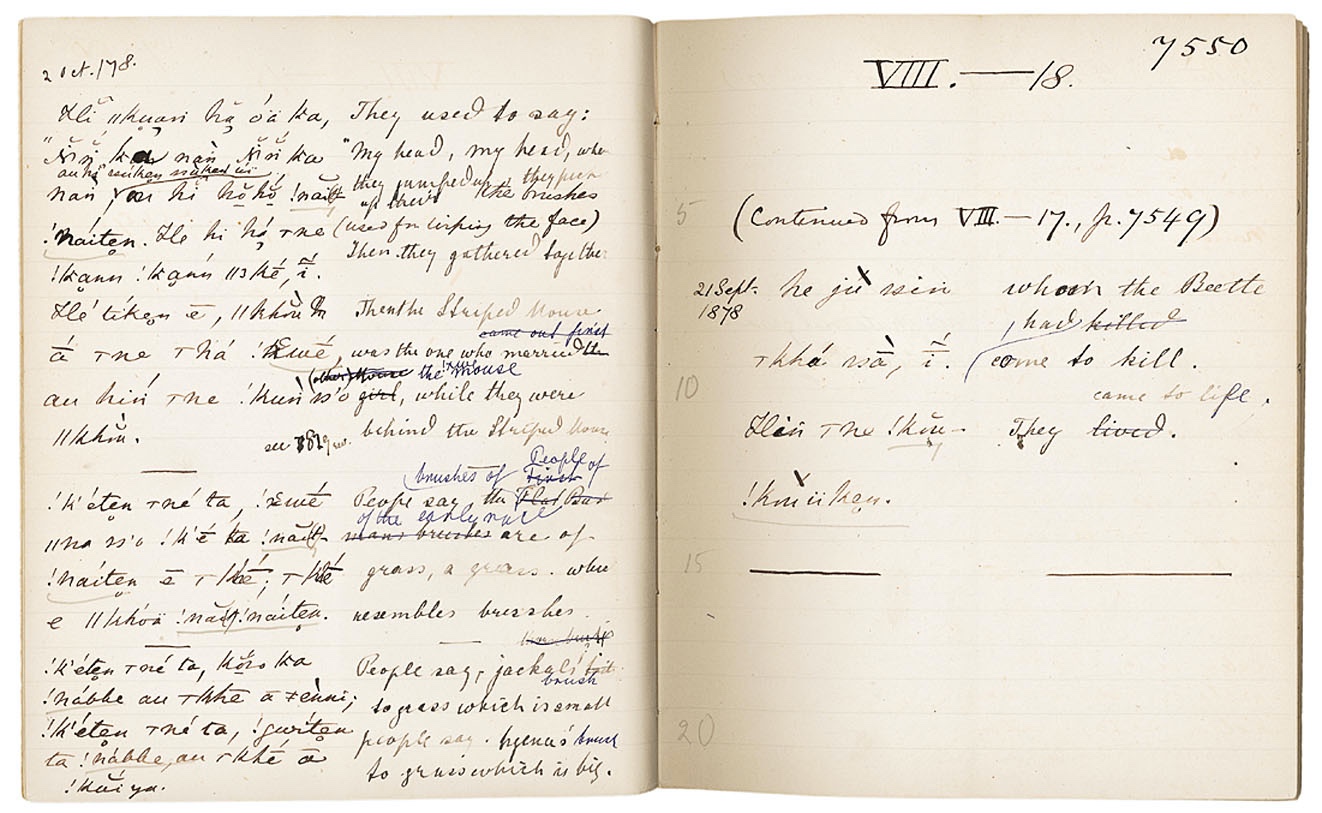 Flywhisks are also mentioned in the kum of the ‘long-nosed mice’ and the Beetle, where we find the plural form of !nabbe, !nai(t)-!naitən. These ‘long-nosed mice’ can be confidently identified with elephant-shrews of the genus Mascroscelides, known also as sengis. In the story, the sengis are said to have ‘picked’ their !nai(t)-!naitən when brought back to life after being attacked by the Beetle.2The Mantis, the Mice and the Beetle The gloss to this mention, found in the same page (L.VIII.18: 7550’), states: ‘People say the brushes (!nai(t)-!naitən) of the Early Race are of grass, a grass which resembles brushes’. This suggests that |haŋ≠kass’o had here in mind a different kind of flywhisk (although it was also called !nabba), one made with grass, rather than hair.

The !nai(t)-!naitən are mentioned in another kum about the sengis. In this narrative, the adversary who cheats and kills the brave, but not very bright, protagonists is the Agama Lizard (http://lloydbleekcollection.cs.uct.ac.za/stories/906/index.html). Towards the end of the tale, the sengis emerge from the hole in which they have been thrown by the evil Agama crying ‘“My head, my head, my head,”, while they lifted up their brushes [ne!netɘn], while they waved their brushes’.3The Lizard, the Mice and the Mantis

The association of flywhisks and sengis is visually expressed in an engraved image at Springbokoog’s main site, part of a unique series of rock engravings featuring four creatures with elephant traits, three of which at least can be identified as sengis.

Close to them are a group of anthropomorphs, and an ostrich. Engraved in the rougher lower part of the boulder, these figures perhaps pre-date the sengis. One of the four anthropomorphs on the right holds a flywhisk. A single anthropomorph on the left is very close to one of the sengis, which in turn appears to be holding a flywhisk on its ‘trunk’. However, on close examination, it is clear that the object is being hold by both the anthropomorphs (whose arms raised in a ‘praying position’) and the sengi. The anthropomorph has another flywhisk in the other hand.

As archaeologist Janette Deacon has said, the images, ‘illustrate a spirit-world experience that is both unique and ambiguous’ (Deacon & Foster 2005: 135). In any case both images and kukummi leave no doubt as to the fact, that, in addition to being useful for ‘wiping the face’ and brushing off perspiration, flywhisks were also a tool of the !gitən, the medicine-men of the |xam. It is perhaps no coincidence that from the place where the Springbokoog engravings are the Strandberg hills, considered to be the petrified body of the mythical Agama, are clearly visible.

An additional indication of this can be found in another of |haŋ≠kass’o’s kukummi, that of ‘!gwaξ!nuntu, the child, and the Elephants’ (). In this long and exciting narrative, what appears to be the female leader of a troop of mythical Elephants takes away the grandchild of !gwaξ!nuntu, the protagonist, and replaces him with her own calf. The Elephant mother clearly uses some kind of powerful magic to cause !gwaξ!nuntu to fall asleep. When he wakes up, !gwaξ!nuntu goes in pursuit, and approaches the camp of the elephants blandishing what the English translation renders as ‘featherbrushes’, in |xam ≠haξrri-he, an object described in the Dictionary (p. 650) as ‘feather brush used as pocket handkerchief, ostrich feathers tied to a stick and used to wipe the eyes’ The reaction of the elephant children to the arrival of the old man with the ≠haξrri-he suggests that this type of flywhisk is something to be feared, and indeed, !gwaξ!nuntu’s magic proves to be more powerful than that of the elephants.4Lucy Lloyd |xam notebooks 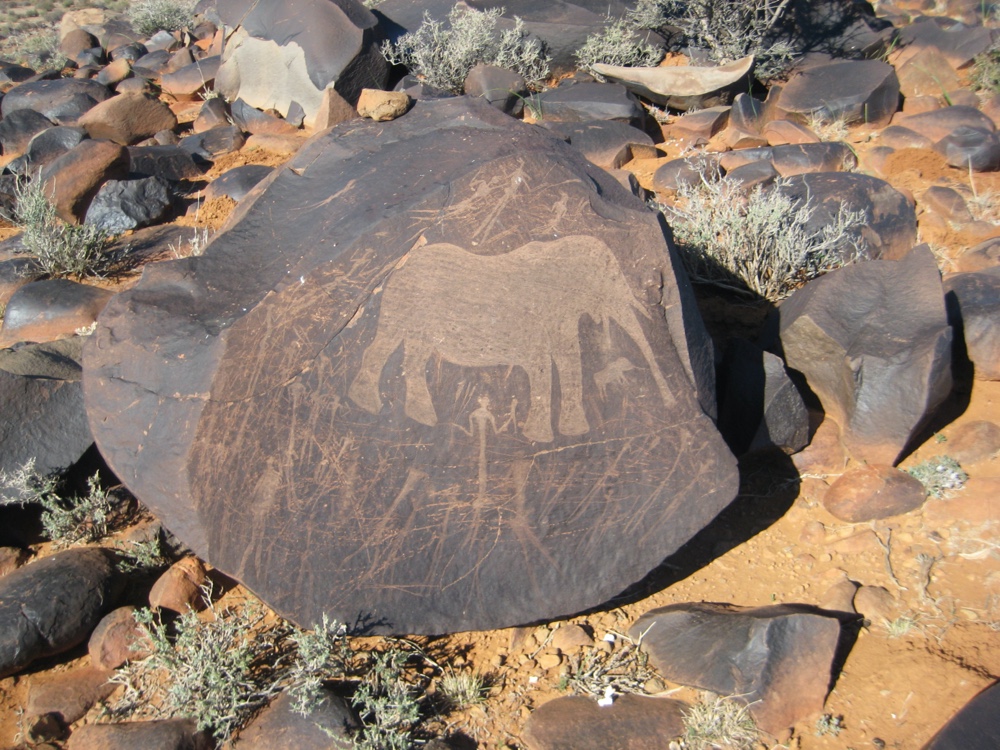 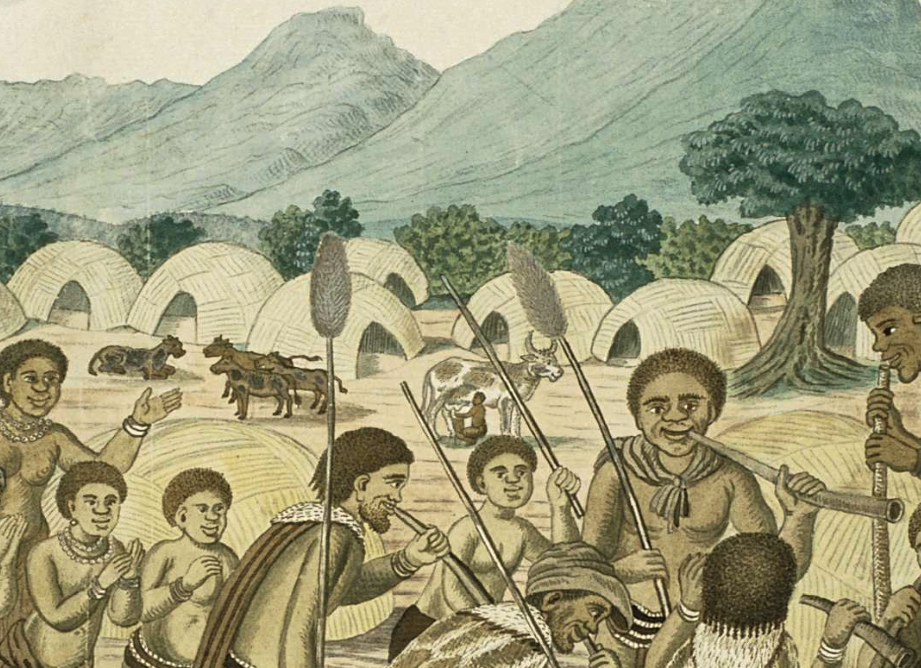 Again, the verbal image of a human-like figure (in this case perhaps a multiform of |kaggen, the trickster-figure of the |xam) holding one or more flywhisks in front of elephants is found in a well-known rock engraving at Springbokoog, one which shows an elephant cow and her calf, surrounded by anthropomorphs who stand or float around them, holding what appear in some cases to be flywhisks, in others reeds, an identification first suggested by Andy Patterson. The central figure of those “floating” above the elephant appears to hold a reed, similar to those that feature in a 1779 panting by Robert Gordon showing a dance in Namaqualand. These reeds (possibly of the species Phragmites australis) would have grown abundantly in the permanent waterhole at Springbokoog, and their presence in this engraving suggests that it has to do with the competition for water resources between humans and elephants that would have been frequent whenever these creatures visited the usually dry Karoo territory south of the Orange River after a period of good rains.

Since the |xam considered perspiration to be a powerful substance that could be used both to cure and cause harm, the presence in the art of these objects used to remove perspiration can be explained as a reference to this body fluid and its properties. Also the ritual activities, such as dancing, that caused it in abundance.